I’ve written about the Teenage Cancer Trust gigs at the Royal Albert Hall before and how I thoroughly enjoyed my time at their music workshops backstage. I had been to other shows since then, including seeing my favourite band, Arctic Monkeys! But in 2012 I was invited to go onstage at one of the concerts! Before every gig starts a teenager who has had cancer will go on stage to tell the audience about their experience with cancer and this time it was my turn!

I found out a few weeks before that I would be going on stage on the night that Paul McCartney was playing, I was really excited to be going to grace the same stage as a Beatle!

Mum came along with me and we turned up at the stage door of the Royal Albert Hall, we were both really excited and as we walked towards the door, we noticed some people standing outside, fans of Paul McCartney of course! As we got closer, they started going “Hi Chrissie, Chrissie can you sign this for me? Chrissie, Chrissie, Chrissie!” Me and Mum looked at each other as if to say what the hell?! I soon realised that they thought my Mum was someone famous called Chrissie. Turned out they thought she was singer of the pretenders, Chrissie Hynde! We then explained who we were and what we were doing at the Royal Albert Hall that evening. They were lovely people and wished me luck for later.

We went it and were taken to the green room and introduced to Roger Daltrey who would be coming on stage with me later on. Roger is a patron of Teenage Cancer Trust and is the one who organises these concerts every year. Roger was really lovely and stayed with us, chatting away. Also, in the room were Ronnie Wood, who came over to say hello and Paul Weller. I was so amazed to be in a room with such greats from the world of music! After a while some more teenagers joined us, the ones who had been at the music workshop that day, we all lined up together and then entered Paul McCartney. He came up to each of us and said hello and shook our hands, it was as if we were meeting the Queen! We then went to have group photos with him and he called us his Beatles! 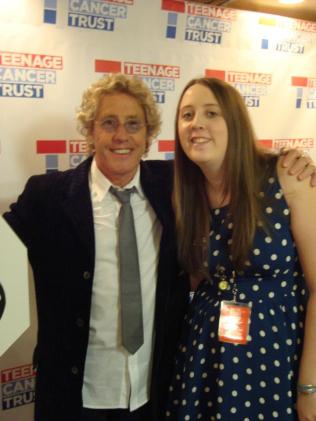 Me & Mum with Roger Daltrey

It was soon time to go on to the stage, people were telling me not to worry, but I wasn’t worried at all! I think my excitement was overriding any fears that I had and I couldn’t wait to get out there! Roger went on first and then came and collected me from the side of the stage and brought me on with him. I was overwhelmed by the cheers and applause from the audience. I hadn’t prepared a speech as I thought, well I’m talking about myself, I don’t need to make notes on that! I did my speech and was again amazed at the response from the audience, all so positive and well it was the greatest experience I have ever had! 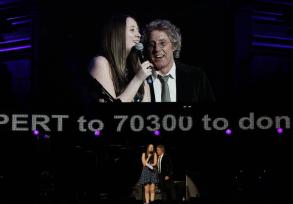 Me and Roger walked off stage, where Paul McCartney was waiting, he nodded at me and said “Well Done”, I went and met Mum who had watched me from the side of the stage and bless her was in tears! We went out to take our seats and on our way through the corridors we were stopped by so many lovely people who congratulated me on my speech. I almost felt as if I had suddenly turned into a celebrity!

The show was of course amazing, a highlight being when Roger Daltrey, Paul Weller and Ronnie Wood joined Paul McCartney on stage! After the concert me and Mum walked through the corridors again and once again lots of people came over and congratulated me on my speech. We went backstage to collect our things and bumped into Stella McCartney, who told me that she thought I was great on stage and that she liked my dress! Such a compliment from a fashion designer hey!
We made our way to the stage door to walk out and we met the same people that were there when we walked in. This time they were asking me to sign their autograph books!

All in all, it was a fantastic day and one which I will never forget. Just to meet so many lovely people was great and if I could ever do it again, I wouldn’t hesitate to say yes!